March Break put a slight crimp in the project and I missed a couple of weeks on the knife. Fortunately, in that time Chuck was able to finish the Master Grind. He's brought the metal down close to the center line we marked from last visit. It's starting to look like a knife now. 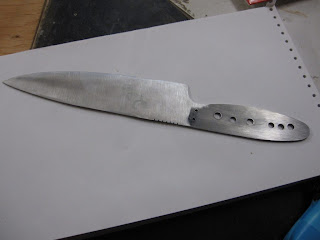 A close look at the edge shows we haven't hit the center lines, but we're close. The rest we'll take down during sharpening. 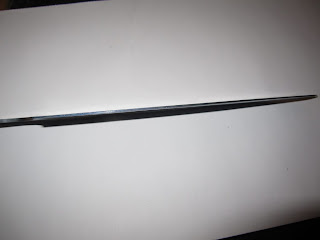 But before we can send the metal out for hardening we have to make it pretty. The metal right now is a mess of scratches, nicks and dings. 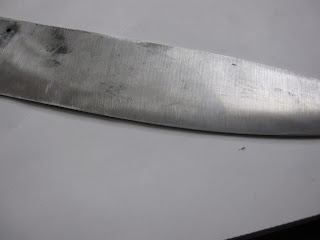 We'll use some 220grit sand paper to start the effort. This is the Karate Kid "Wax On, Wax Off" phase of the project. Time for me to get all Zen about the process. There are no tools to make this easy ... only elbow grease. 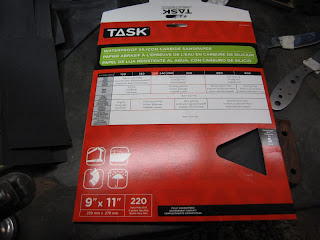 This bench will be my church pew for the many more hours. It holds the blade at a comfortable working angle and supports the blade underneath so my pressure doesn't bend it. I can rotate the metal as needed relatively easily. 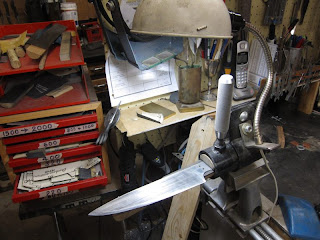 Assume the position. For the 220 grit I can do a forward/backward motion initially, but later as we get closer I have to switch to a single direction stroke. And this is only the 220 grit, we're going to be going all the way up to 800 grit ... I save the details of that little treat for later. It gets quite fussy. You can see some of the higher grits in the photo above.
Even putting the sandpaper on the blade and taking it off is an art. Any horizontal movement, angles or swirls of the sander will leave an ugly mark on the metal ... which means more work.
We aren't taking off a lot of metal with the 220, so it takes time to get take out all the little scratches from the belt sanders. 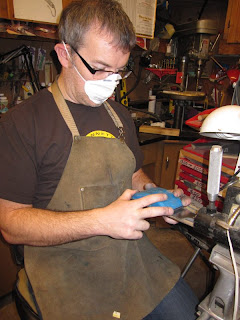 After about an hour or more of steady work I think it's looking pretty good. I mark a couple of spots with a normal indelible ink marker (like a Sharpie) on the blade that need more work and hand it off the Chuck for inspection. He's relatively unimpressed and proceeds to mark up the blade like a mad man. You could never imagine how thick marker ink is. Feeling this ink on the smooth metal feels like Mount Everest. And the stuff gets deep into any remaining scratches, so you really have to work to make them go away. 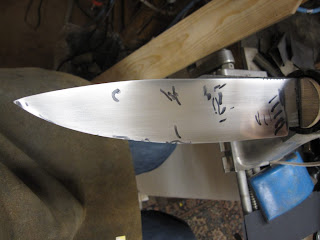 After another hour or more I've got a nice pile of used paper. It doesn't take long for this stuff to lose its grit. You're constantly changing it and moving it around. 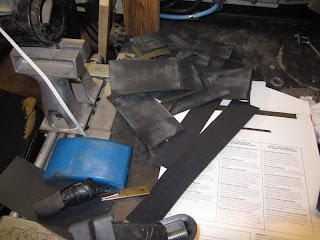 But the end result is beautiful. Blemish free. And it's only going to get better with the higher grits.

This is the part of the process I really have to get right. This is the part when I'm showing the knife to friends that I can say "I made that" ... any blemishes will immediately stand out.

And this was only one side of the blade. I still have to do the other side with the 2200 in the same manner as this side was. And the edges. 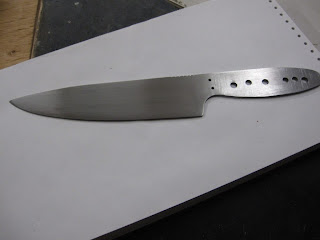 Fortunately, some of the mess will be hidden by the bolster, which I've indicated here. 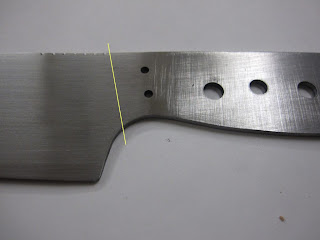