A few years ago I started a journey of creating a ceramic pot BBQ smoker to rival that of the Big Green Egg and its competitors (or this). For those of you that don't BBQ, the BGE is a BBQ/Smoker that has great insulating capabilities allowing for extremely long cook times and steady heat control ... two factors critical to perfect BBQ.

Note: I'm using BBQ in the proper sense, not to be confused with the grilling that most people do on their propane gas grills. BBQ is low and slow. It's the process of putting smoke flavor on large cuts of meat and slowly bringing the meat to an internal temperature of between 130F to 200F (depending on the cut and variety). Most classic BBQ is a cut of meat like a beef brisket or pork shoulder. Of course, you can also do chicken and ribs in a smoker, but it's a shorter cook time so the insulating power of your smoker isn't as critical. I'm talking 8-16hrs of cooking here. Generally we want to maintain an air temperature of between 200F-250F with 220F optimal. We want to bring the internal temperature of the meat to about 200F in order to break down the collagen in the meat without cooking the crap out of the outside.

The problem is, these ceramic cookers are about $1000+ for anything half decent. Too much for me to experiment with something I may not get into long term. I needed to start cheap and work my way up as my experience grew.

That's when I saw the famous Alton Brown special ...

Without getting too verbose, the process is very straightforward. I basically mimicked the Alton Brown approach with slight modifications. 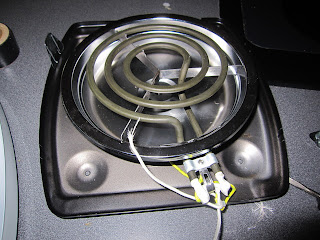 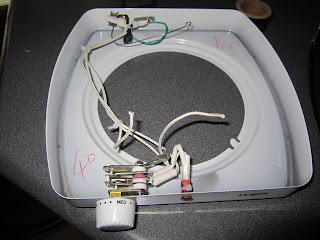 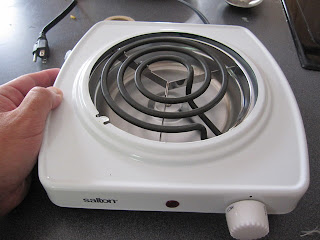 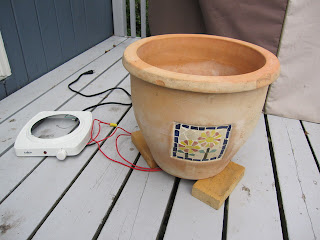 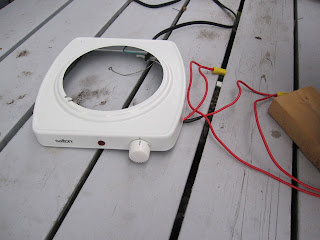 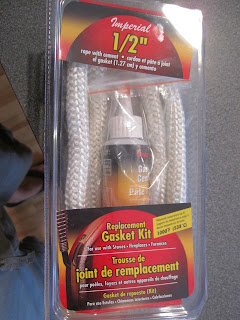 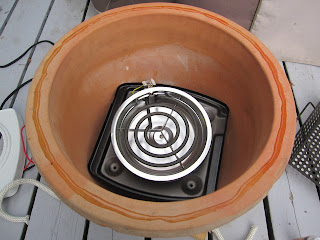 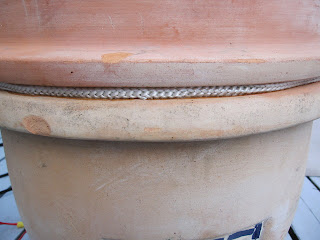 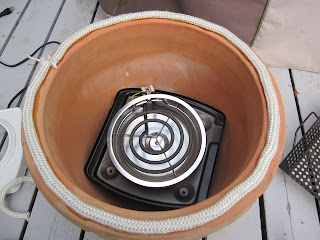 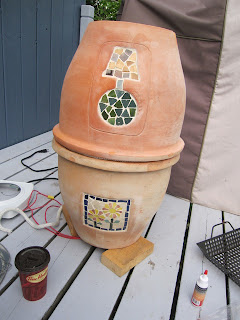 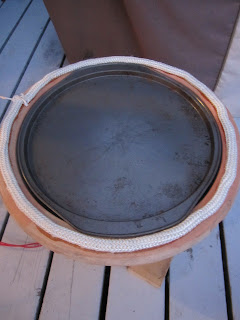 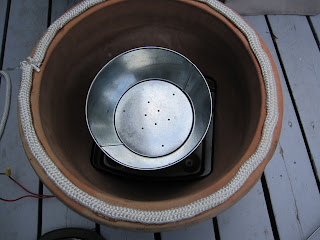 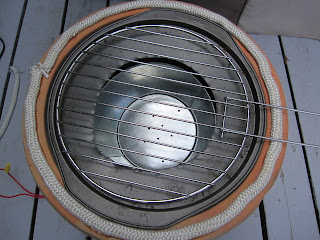 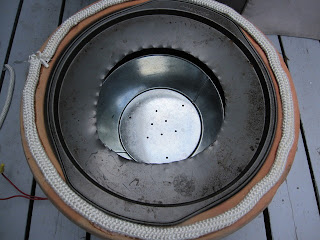 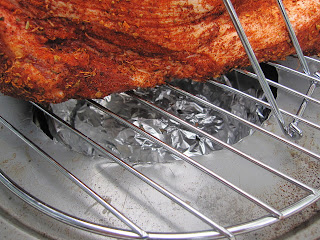 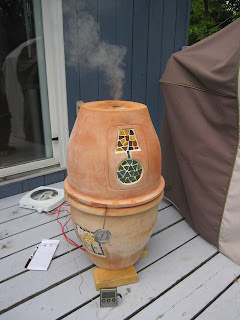 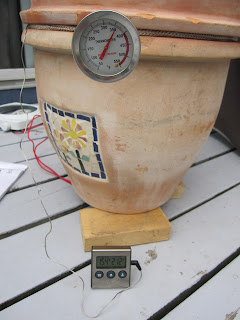 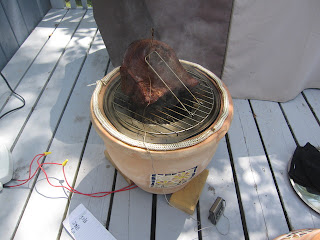 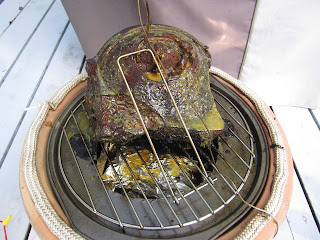 The result. It was pretty good, but had a lot of flaws:


Version 2
Buffed up the wiring with some teflon coated oven wire and high temperature heat shrink tubing.
A note about smoke. Meat will take smoke up to about 160F ... after that your smoker is essentially a fancy oven. You can wrap your meat in aluminum foil to keep the moisture in and not worry about it. Also, you don't want to over smoke your meat and watch the moisture too, moisture and smoke can cause creosote which is very bad for you and tastes even worse. However, most of the time people experience creosote in BBQ is by using green hardwood or using too low a temperature.
So ... Version 3
I wanted to get the isolation between the heat source and the meat. So I put a pan in between. I had read that fruit juices like cranberry, pineapple or apple can put a nice taste on the food. We did some modifications (these picture are after many many smokes in the cooker. It didn't always look this rough) 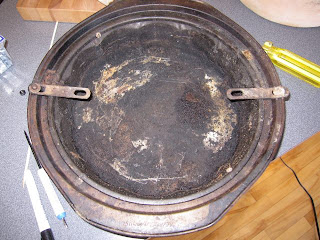 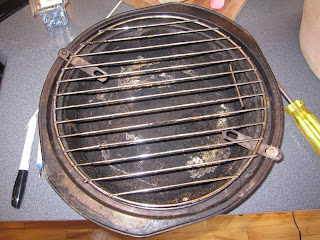 The meat would sit just over the water pan. The juices would fall right into the liquid and the moisture would help cook the meat ... in theory. 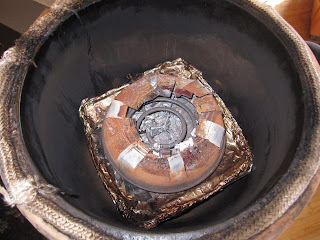 A heat shield to keep the wood chips off the direct heat.
The results:
All in all, not a very good result.
Version 4
Switch from juice to sand. And not soaking the wood chips. Having sand in the water pan did a couple of great things:
The downside was the heat from the element was still blasting against the bottom the sand pan and making the sand as hot as the surface of the sun. The fat was smoking into a nasty concoction long after the wood chips were finished. Wood smoke should be a nice blue color. Fat smoke is white. Some white smoke is good. Billows of it ... not so much.
But I still couldn't get the heat to the top of the chamber effectively.
Version 5
I picked up a dual probe, AC-switched PID-based temperature controller from Auber Instruments. 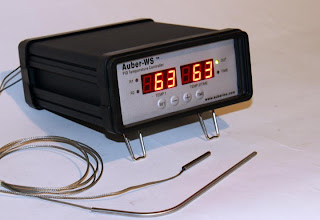 Yes, this was expensive but here was my rationale:

The result ... temperature control is no longer a concern. It's program-and-forget.

Version 6
So, I needed to tackle the two remaining problems:


Heat deflectors are common items with BGE owners ... there are commercial and home made ones.
This weekend I made my latest changes. I removed the pizza pan and put the sand bowl on a set of screw legs. Additionally I put the wood pan on a tray above the element. 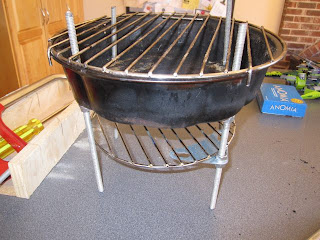 This site directly on the hot plate chassis making it easy to remove as a single unit. 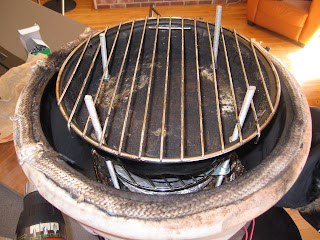 It's slightly raised above the rim of the bottom pot so the air flow will be directly into the top chamber. 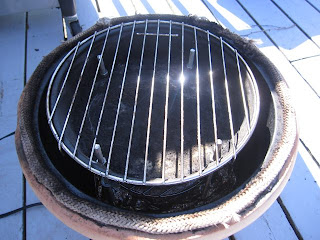 Fits nicely and is pretty sturdy. 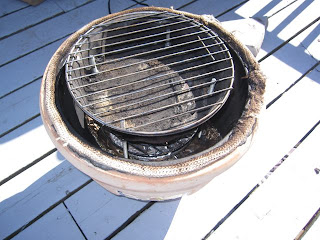 And a crappy pan which will be my new wood chip pan. 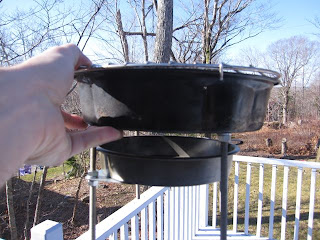 Next weekend I hope to try it out ... stay tuned!