I've been working on a robot since I've been in High School. Several robots actually. My downfall has always been with the mechanical linkages between the motor and the wheel. My fabrication skills just aren't that great and I don't want to incur the hefty machinist fees that I have in the past. My solution to this has been to get a home CNC router to help me fabricate gears, brackets, mounts and whatever I need for the robot.

At the end of last year I picked up a ZenToolworks 12x12 kit. This is a well-priced, well designed kit that will give a basic CNC router capable of 12"x12"x5" of work area. Over the holidays I started on the fabrication of the machine itself. I won't go into the details of it here, since it's well documented on the Toolworks site.

The kit is a little daunting when it first arrives. The thing weighs a ton and has lots of little scary parts. There are your core PVC parts ... 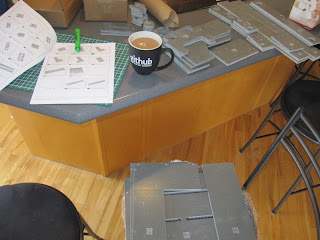 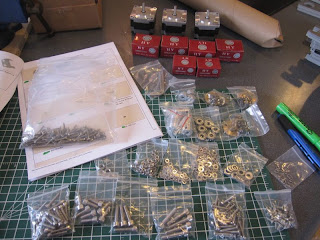 The tricky part is ensuring your bearings are installed flush with their holders. Also finicky is the tension on the backlash nuts. 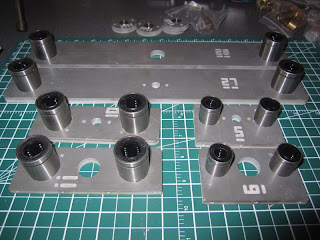 In the end the basic device came together as expected. 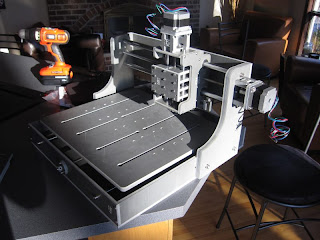 But now the real work began ... mounting and hooking up the electronics. We have two power supplies (one for motors and one for the router), a stepper motor control board, a router speed control board, six limit switches that need to get mounted, an on/off switch, a speed control and an emergency stop. I didn't want to rush into a crappy wiring job to see how the assembly went only to find myself debugging a mess of wires. Instead I put off my excitement to mount all this stuff correctly.

I decided to mount everything on a piece of masonite so it could be mounted on the rear gantry. 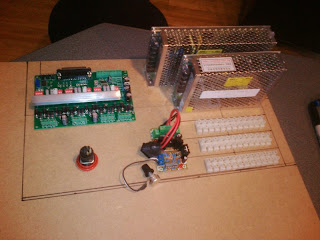 I figured I'd mount the two power supplies outwardly to conserve space and help with the heat dissipation. I'm not sure yet if this is a good idea or not. But this is as far as I got for a while until I gather the needed spacers, connectors and wiring. 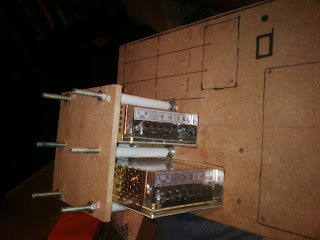 Today I was able to get my 4-pin connectors on the X, Y & Z stepper motors. I also had to resolder a voltage regulator from the router speed controller board that was completely unattached to the PCB. Just a fluke that I spotted it before it fell out and had no idea which way it went back in. 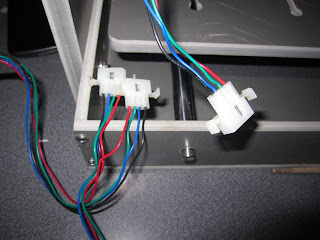 As well as mount the emergency stop, speed control and on/off controls. Note, this is the what the view will be from the front of the machine. All the electronics will be hidden behind. 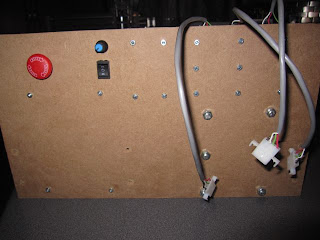 I also decided to bring the motor connectors to a terminal block rather than directly to the controller board. My fear was a renegade machine pulling the control board apart from the mounts. At least this way the wire should fail before the traces on the circuit board. 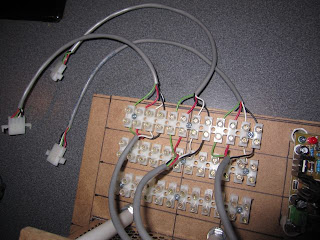 And finally here is how it looks from the back. Next I need to wire up the power, the limit switches and the controls. I may leave the router and limit switches for now so I can focus on basic control. 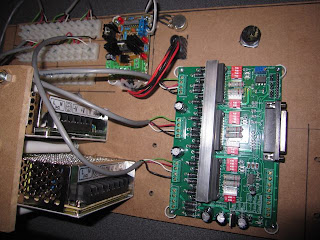