A lot happened since my last report but nothing really photo worthy. When I started working on the 220grit on the other side of the blade I discovered some deep scratches from dirt on the blade holder. I had to take them out with the belt sander. Then it was back to hand sanding. 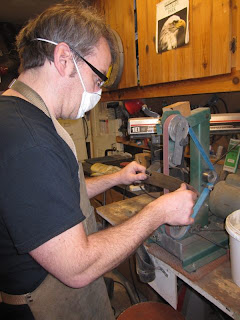 I'm now intimately familiar with these two tools. Far too much. 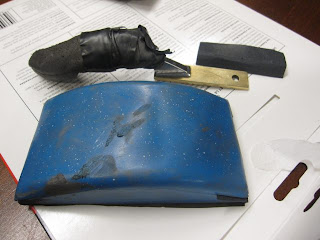 Once I got the 220 grit done I could focus on the 320 and 400 grits. The 200grits were done along the length of the blade, the 320 was done vertically so as to remove the horizontal 220 lines. Then the 400 was done horizontally to remove the 320 lines. By the end of it you're essentially just doing a single stroke in one direction to get it polished. 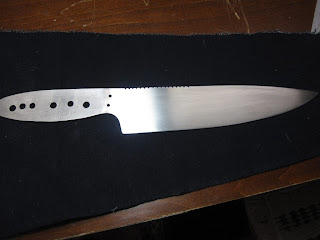 Then the whole process was repeated on the edge of the knife. You'll also notice a change I made to the finger grips on the top edge. I lengthened them out another couple of inches since I changed the bolster style. You don't usually see this on a chef's knife, but the finger grip on the top edge is a very common. I think it'll be quite handy when dealing with slippery ingredients. 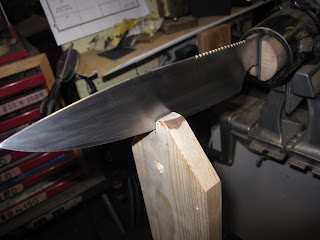 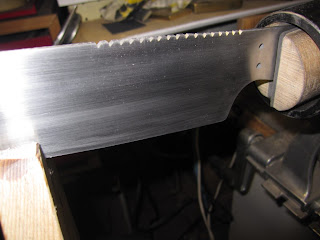 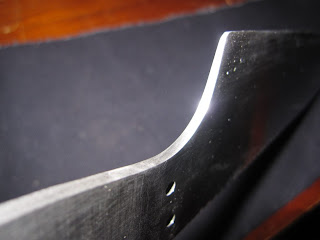 Finally, we discussed handle material. We both agreed to go with stabilized hardwood. Chuck is going to use the Curly Maple Grey. I have another style in mind. And I decided to go with a stainless steel bolster and pins. 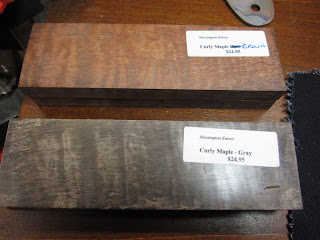 Now the blade gets sent away to Mossington Knives for hardening! I spoke with Mike Mossington about materials and he's going to gear me up with what he thinks will work best. I'm going with a style like Mike's Algonquin Hunter blade that he has for sale on his site. Should take a couple of weeks to get the additional materials and hardened blade back. I indicated which holes will take the pins for the handle and bolster. The rest will be filled with epoxy. 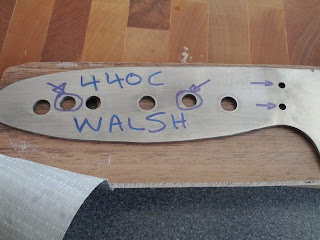