Another good evening of progress on the Chef Knife. When I arrived Chuck was showing me some of the knives he recently finished. Amazing stuff. You couldn't get a hair between the bolster and the handle. Note the brass inlay on the bottom knife. These things feel so comfortable your hand would never get tired. 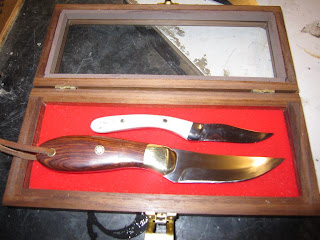 Our steel came in this week (1/16" 440C steel). Chuck had trimmed down the plastic template we built last week and put blue tool marking dye on the new steel. He already got well into his knife (he's going to make a chef's knife too). He even got his master cut in already. The master cut is the first main cut to taper the edge of the knife, bringing it into the center line evenly while maintaining the desired curve of the blade. It's a big step. 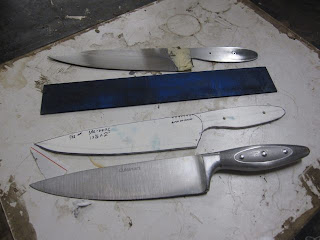 But tonight, I had to cut out my steel in order to get it into something I could put a master cut into. I started by etching the shape of the template into the marking dye with a scribe pen. Then off to the metal band saw to get my rough cuts around the shape. The marking dye doesn't last very long when the oil hits it and there is very little play in that blade, lots of relief cuts. 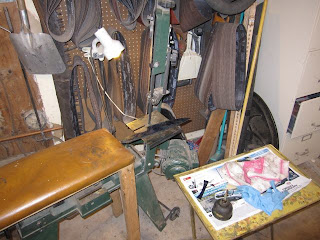 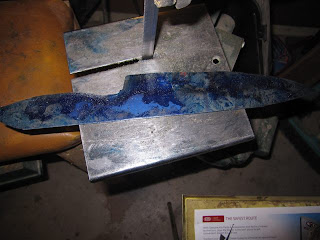 Then to take down the rough cuts to the etch lines on the belt sander (about 42 grit). 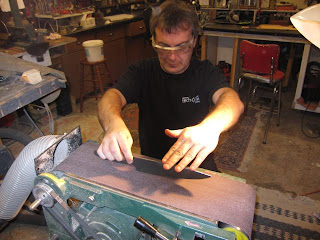 The bottom curve by the bolster needs a different tool. Here Chuck has a round disk (about 80 grit) attached to his radial arm saw. 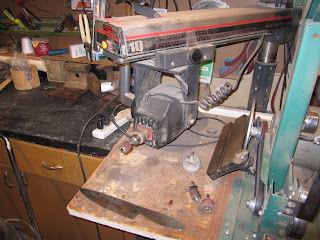 Took some extra attention to take out any nicks from the rough cut. 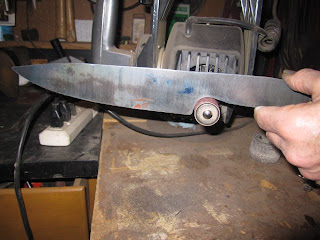 I decided on just two brass pins holding the handle. To drill these out first I had mark the centerline of the knife (vs the line of the handle, which would make sense if I was going for a more radical design). 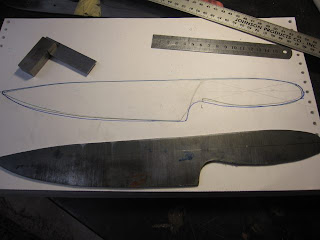 Then mark and punch when the two pins would go. 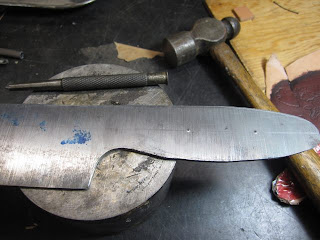 And drill them out. Additionally I added 3 other drill holes to help hold the epoxy in the handle. The 2nd and 4th holes are centerlined, it doesn't really matter where 1, 3 and 5 go. 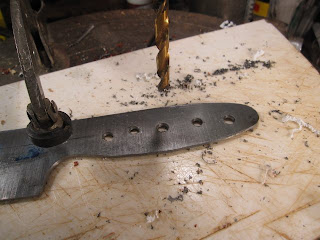 Then had to get the spurs off the drill holes and this was surprising difficult since any bad sanding would cause the handle halves not to fit perfectly snug. Had to hand sand it with a locking magnet. 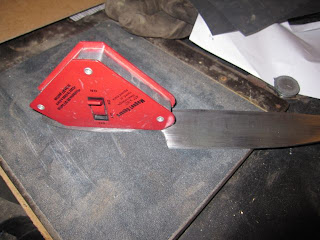 But it did an even sand as you can see from the scratch marks in the steel ... 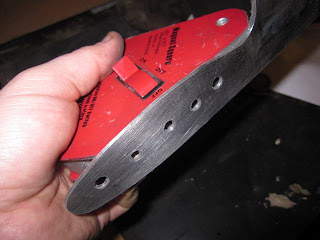 Now I could work on the top notches. I usually choke up on my chef knife around the bolster, but sometimes I'll do the one finger extension. I wanted to put some grip notches along the top ridge. I settled on 4mm center-to-center with a 1mm depth. 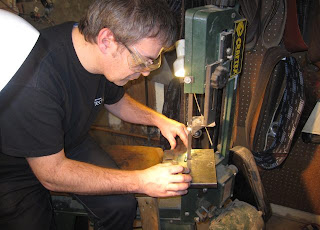 Later I'll file these out to make them pretty. No need right now since I'll likely be taking down the steel a little more yet. 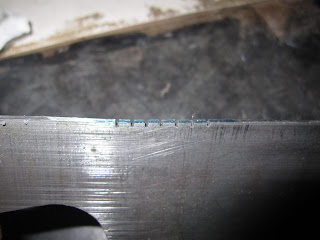