Just before Christmas, one of my cooking buddies showed me a new set of knives that his wife bought him. They were beautiful. Damascus Steel. Incredible handles. They were works of art. They also cost a small fortune. It just so happens that one of my neighbors (Chuck) makes knives and, let's just say, he's pretty damn good at it. I sent him an email and asked "Care to teach a noob?" He was all over it.
See, the guy is a Maker. I don't think there's anything this guy can't do. And there's nothing a Maker likes more than having someone else as excited about a project as he is. I'll be telling you more about this guy in later posts ... there's a lot to tell.
After some delays, I finally managed to sit down with him and talk about the project. I brought the old Cuisinart Chef's knife I've been using for the past few years. I really like the roll of the blade and the size of the handle, but I tend to choke up on it and the bolster isn't a smooth grip for me. We'd have to work on that. We started with some outlines of the existing knife: 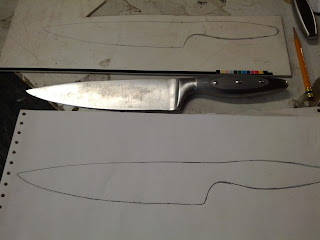 We also checked the Rockwell Scale of Hardness (RC) of the current knife using hardness files. I find it very easy to sharpen, but it never seems to hold an edge for very long. Turns out the knife is between RC60 and RC65 which is pretty hard. I suspect I've just been too aggressive on my sharpening angle. 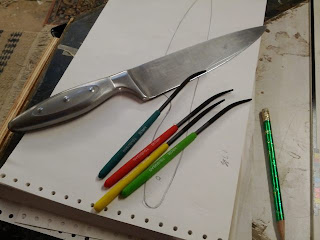 Next we talked about handle materials. Chuck has an amazing collection of antlers, horns and other natural materials. These are really funky, but I'm a little concerned about the porous surface around food. 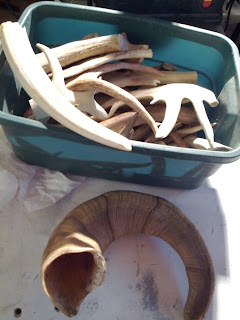 Chuck even has some Mastedon ... really. We settled on some Stabilized Hardwood. I'm going to pick a final material later in the game. This stuff is hardwood pressure-injected with epoxy. It feels like plastic but retains the hardwood grain. Very cool material. 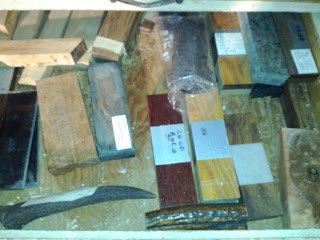 This was my first session. We're going to try to meet once a week and create a mock up out of wood so I can get familiar with the fabrication tools, make a wooden mockup, tweak the bolster and handle design. The steel has been ordered, I'll tell you more about that in a later post.
Stay tuned!